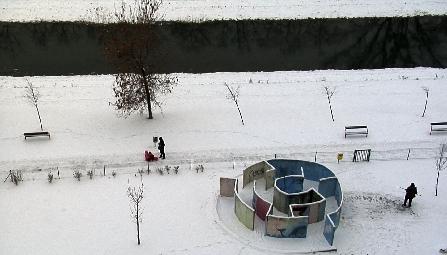 “What is cinema?” Jean-Paul Belmondo asks (with the voice of Jean-Luc Godard) in Charlotte et son Jules, “It’s a big head making faces in a small room. You have to be stupid to love this. I know what I’m saying, cinema is the art of illusion”. This is one of those spiritual, philosophical Godard quotes we like to post on our Facebook wall or pin on the cinema section of our personal library. Next to Bruce Willis’ famous “the written word is going the way of the dinosaurs”.

Serious and funny words side by side with stupid and hilarious ones. There are always hidden truths and secret references in the dialogues and quotes Godard provides in his typical deadpan style. In this case the statement made by film lover and dictator Joseph Stalin: “Cinema is the art of illusion, yet it dictates its laws to life itself”. But humour is also involved when Godard takes to the screen.

It has always played a big part in his cinema. Not the fast paced verbal humour we associate with the Marx Brothers, Monty Python or Quentin Tarantino but the physical comedy Buster Keaton, Jerry Lewis and Jacques Tati transformed into an art. Godards humour is the humour of the lonely child and the maladjusted adult.

In his films the silliness and humour of a situation is almost always linked with a moment in time when a movie character blatantly ignores certain ‘codes’. Because he or she doesn’t know or doesn’t want to know these codes. If there’s one thing all Godard movies share it is their distrust of such restrictivbe codes. And the ability to combine the search for a deeper truth with a mission to make us smile.

Godard showed us that movies can make us think ànd laugh about life. Comedy can get us to laugh about something that is really sad, drama can have us cry about absurd and ridiculous situations and Godard mixes it all up. A bout de souffle was a comical crime movie, an illustration of Jerry Lewis’ maxim “a man in trouble is the starting point of each comedy”. It was also an hommage to Monogram Pictures, the small American production company specialised in B-movies.

What characterized these B-movies was the lack of time and care that was spent on them due to the extreme low budgets Monogram provided. Poor acting, shabby photography and stupid stylistic mistakes led to a different (read: lower) quality than productions made by the Hollywood majors. In other words, there wasn’t enough money available to make ‘good’ movies, that is movies made by the book. This relationship between money and cultural codes fascinated Godard throughout his carreer.

There was a difference though between those B-movies and Godards Belmondo and Seberg movie. Directors like Jacques Tourneur, Edgar G. Ulmer and Joseph H. Lewis were not happy at all about their status as B-movie director and they tried their best to come as close as possible, given the available financial means, to the traditionel form of a classical Hollywood movie. They were eagerly looking to ascertain an A-status.

With Godard, things were different. When A bout de souffle was released in 1959, the former film critic had to deal with journalists and filmmakers who called him incompetent because of the ‘mistakes’ he obviosly made. It took a while before it was clear to everybody that Godard had edited his film in such a way that those ‘mistakes’ became visible. The limitations of B-movies due to financial hardship became something else in Godards hands: the results of an esthetical choice. The cards were on the table. It would lead to a wonderful game, bewildering movie goers with films that work jokes, experiments and metaphorical statements.

Nowadays Godard is a figure from the past and what is worse, ‘le cinéma d’auteur’ has pushed humour to the exit. Together with ‘deconstructing the codes’. These thoughts sped through my mind when I watched screenwriter-director Maryas Priklers self-conscious slow cinema effort Fine, Thanks (‘Dakujem, Dobre’), based on his medium-lenght graduation movie (a festival favorite that made it to the Cannes Cinéfondation selection in 2010). It’s a fine and well-made (with respect for the codes that will please festival dwellers) movie, but why so seriously?

Especially with a title as ironic as Fine, Thanks. Prikler states that “everybody asks ‘How are you?’ and they are often answered with ‘Fine, thanks’; still you might never know what is behind this commonplace”. And he ads “I’m a slow person myself, so it felt natural for the movie to be also slow”.

Prikler cleverly links the desintegration of a family and a (East European) capitalist society when both are deeply in crisis. An emotional crisis implicating family members and a financial crisis touching company workers. We follow the fights and the growing distress of the characters only to discover more secrets and problems. The protagonists are victims in a bigger drama (loss leads to anger and frustration) and they are all ‘in the same boat’ (a boss turns out to be a family member).

Fine, Thanks is an non-flattering portrait of people whose professional and personal relations are destroyed during a kind of war, an economic crisis leading to an ailing society. Financial problems (and a hidden secret) affect the intimate lives of the characters and their twisted relations. But the main focus stays on the human disasters. Unlike his short, that focused on an aged couple, Priklers movie combines three stories in which Slovenians fight divorce, death and alcoholism.

An employer is confronted with problems at home and in his company, and older man loses his wife and his independent life and his son has trouble coping with divorce and a personal tragedy. The characters find each other during a funeral and finally, a wedding party. Hope clashes with sadness and bitterness. “You just don’t get hung up on just one man,” a drunken mother mumbles to the bride who replies “Thanks mom for telling that on my wedding day”.

Humour at last, because up to that point this has been an unnecessarily dark and depressing movie. A movie that tries to hard to look authentic by using a documentary style, with a handheld camera that observes – without extra light – and tries not by voyeuristic about it. But the hidden camera point of view that Prykler uses is much to selfconscious and the ‘documentary style’ underlines in a demonstrative way the ‘reality’ of the situations, not the cinematographic codes that are used to tell this story.

“Sometimes it looks like something can even be beautiful in this life” one of the anti-heroes says when he’s confronted with beautiful light while driving in a car. The camera stays in the back seat so we only get a glimpse of this thing of beauty. No coïncidence for up till then the ‘no future’ atmosphere is striking.

The radio plays Simon and Garfunkel (“no one dared disturb the sound of silence”) followed by depressing news flashes (“hundreds of people are loosing their job due to the economical crisis”). An elderly couple argue about the ownership of their appartment (“I need to lie down, I can’t go on any more” the woman concludes before dying off camera). An employer questions the loyalty of a worker (“does your family pay your wages?”). A woman shouts “I hate him, he destroyed my life” from her terrace in an histerical outburst (“sometimes she yells, sometimes she’s in a rage, we’ll deal with that too” her husbands concludes). An old man whispers “I don’t want diapers”.

Matyas Priklers cinema is a big head making grave faces in a small room, to serious and selfconscious for its own good. Fine, Thanks lacks humour, silliness, a story that changes pace and direction in an unpredictable way, risky esthetical choices, daring experiments, crazy ideas and a irreverent attitude towards codes and metaphors. Here’s a movie that shows and tells us what we allready know. It could have been one about what we don’t know yet. That shows us unfamiliar colors, worlds and emotions. With a dose of humour and a pinch of craziness. Unafraid to appear incompetent en to toy with expectations. Let’s go crazy!

Checking in from Ghent, Belgium